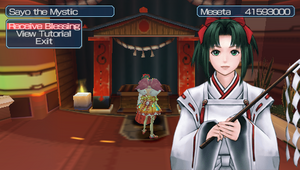 Blessings are generally beneficial effects that affect the whole party in some way.

Each Blessing only lasts one Mission, and are removed if the player gives up the mission midway, exits to the main menu, or exits the game.

While it's said that giving more meseta would yield a higher chance for better blessings, no such effect has been observed as of currently.

In Multi Mode, Blessings can only be done by the party leader, and will affect all the users in the party.

The Boosts to ATK, TEC, DEF, MND, and HP are applied directly to the base stats. The increment calculation ignores the bonuses from Rebirth or Abilities.

It seems that it's also easier to get better effects as the total meseta amount increases (unverified).