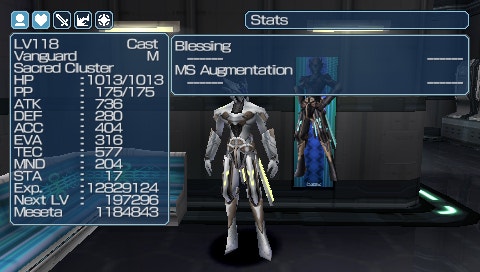 A player looking at their stats.

Stats are the 11 parameters governing the performance of every player and creature in the Gurhal system. Every race, gender, Type, level, sex, weapon, shield-weave, etc. has varying levels in each Stat, which determines their performance and what they are strong and weak at doing. The goal in Phantasy Star Portable 2 Infinity is to max out these stats as much as possible to improve the player character and allow them to achieve bigger and better things.

Below are generic overviews of the stat rankings between the sexes, races and Types for each stat.

Depending on the player character's sex, an approximate 5% boost will be applied to certain base stats.

If the player wishes to maximize a specific stat, the following combos are to be used:

Total stats are calculated as follows:

A player's base stats will vary on their sex, race and character level.

Type stats are modifiers to a character's base stats, rather than flat stat values.