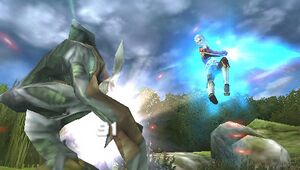 Blasts are special attacks or transformations that can be used from LV10 onwards. Blasts are used by filling the blast gauge, which is increased by dealing and taking damage, and then pressing the

buttons together. Each race has their own unique type of blast, which are equipped in different ways. If the player does not have a blast equipped, the blast gauge will not increase.

There are 4 different types of blasts:

Using a blast will also heal the user of any status effects, and with the exception of infinity blasts, also provide invulnerability for the duration of the blast. All items cannot be used, and all items are unequipped at time of use, meaning that stats from items cannot be used to boost the potency of any blast.

Blasts cannot be used in certain areas, primarily those that force the camera to non-standard angles. The player also cannot use blasts while standing on top of a teleporter.

Once a player is character LV10, they will unlock access to the blast gauge, providing that a blast is equipped. The blast gauge is displayed at the bottom left of the screen as a border to the player icon.

The blast gauge increases as the player deals damage and takes damage, and once fully charged, the player will be able to use their blast by pressing

together. The blast gauge can only start increasing once a blast has been equipped. For blasts which are accessed through equipping a module, the blast gauge will increase providing that a shield-weave on the action palette has a blast module equipped, meaning the player is free to switch between shield-weaves which may not have a blast module equipped.

When the player is incapacitated, all blast gauge will be lost.

The rate of blast gauge accumulation can be increased by 35% by equipping the ability Wild Blast.

Mirage blasts are special attacks exclusive to humans and newmans, which summon mythical creatures based on ancient civilization technology. Mirage blasts deal Technic damage, and each blast has an attribute element associated with it. Mirage blasts are equipped by equipping the appropriate blast module.

There are 6 different types of mirage blasts, one for each attribute element. Each blast has different properties, with some breaking chains and benefitting from the chain break, others building chain, and others providing a support effect for the user and the party.

There are 15 different types of SUV-weapons, each type attacking creatures in different ways, and one providing support for the user and the party. All SUV-weapons deal neutral damage.

Nanoblasts are special transformations exclusive to beasts, turning the user into a powerful anthropomorphic animal. Nanoblasts last for 30 seconds, and deal melee damage. They are equipped at the Salon, by tattoo'ing a blast badge onto the beast, which gives them access to a specific type of nanoblast. The different nanoblasts are unlocked at higher character levels. All nanoblasts deal neutral damage.

During a nanoblast, the player has complete control over the blast, and has access to unique

attacks, which build and break chains, respectively. As soon as the 30 seconds are over, the user will revert to their original form, even if they are in the middle of an animation.

There is also a special nanoblast, known as "berserk", which may occur after a nanoblast using Zavn Val or Gavri Val ends, with the chance increasing the more hits dealt during the nanoblast. This nanoblast is stronger than all the others, and will also damage allies, so care must be taken if a beast enters berserk mode.

Infinity blasts are special transformations exclusive to deumans, heightening the offensive and defensive capabilities of the user by harnessing the photons stored in their bodies. There are 4 different types of infinity blast, each aligned with a certain type.

Infinity blasts require no additional setup once the player is at least LV10, meaning they can be used in situations where other races would not have access to their blasts, such as challenge missions. Infinity blasts last for 25 seconds originally.

Unlike other blast types, infinity blasts do not provide the user with invulnerability, meaning that the player may die during the blast. Items also cannot be used.