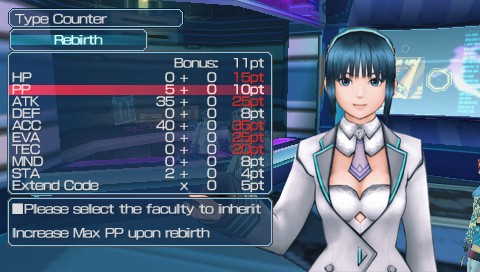 A player about to Rebirth.

Rebirth is a mechanic in Phantasy Star Portable 2 Infinity that allows the player to keep progressing beyond the normal level cap of 200 and bolster their character up even more. Rebirth resets the character's level to 1 in exchange for permanently increased stats, Extend Codes and an increased Type level cap.

The character itself is not reset, so parameters such as name, sex or race cannot be changed using this feature, nor will any other progress, such as mission or story progress, be lost.

Rebirth confers the following bonuses upon the character:

How to Rebirth[edit | edit source]

Rebirth is accessed from the Type Counter in story mode once the player is at least character level 50. Once Rebirth has been chosen, the player must choose what stats they would like to increase for their next playthrough, and then will be asked to confirm their choices before finally rebirthing.

The amount of points that can be allocated to stat increases depends on the player's character level, with only 5 points being accessible at level 50, and up to 600 points at level 200.

Rebirth allows the player to increase their Type level caps. Originally, a player can only level their Types to a maximum of level 30, however through Rebirth, a maximum type level of 50 can be achieved. The level cap increase will apply to all Types on the character, not only the one currently selected when performing Rebirth.

Rebirth points are the primary currency obtained from Rebirth, and allow the player to increase the following stats:

Each stat has a limit to which they can be increased, and each increase is persistent across Rebirths. The cost of each stat increase varies from stat to stat, and the cost increases every time a stat is increased. Each stat can be increased a total of 10 times.

There is no total limit to Extend Codes, but only 10 can be obtained per Rebirth.

Below is a table showing how much each stat will be increased by, how many points it costs to increase them, and the limit that a stat can be increased by.

To max out all rebirth bonuses, it is required that the player Rebirths multiple times to gain the 3,080 points necessary. Below are some example paths:

While it would appear to be more efficient to rebirth at a lower level, this is not recommended as EXP from creatures raises exponentially at higher levels, and the player would not be able to play higher difficulty missions or earn titles doing multiple level 50 rebirths.

The recommended path for maxing all rebirth bonuses is: Rebirth for the first time at level 109, then do the subsequent 5 Rebirths at level 200. This allows the player to experience all content that Phantasy Star Portable 2 Infinity has to offer on their path to maxing, while also allowing the player to obtain their extra 4 ability slots early.

However, a player can choose to rebirth whenever they want, there are no direct penalties for rebirthing when the player wishes to do so, as eventually all stats will be maxed.

Below is a table listing the amount of rebirth points that the player obtains at each character level.