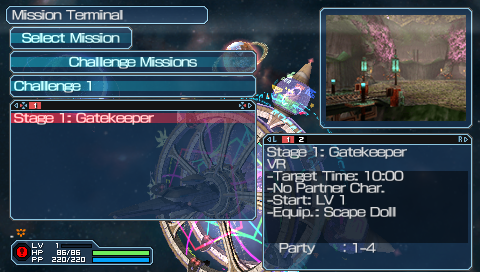 Challenge missions, as seen from the mission counter

Difficult missions with equipment, level and other restrictions. You cannot keep items found on these missions.

Initially, only the starting stage of each set is available to play, but clearing a stage will unlock access to the next one. All players in the party must have the stage unlocked to be able to play it - otherwise previous levels that players may have already completed may have to be replayed.

Type abilities and blast modules are usually not provided, and beasts do not always start with a blast badge for their nanoblasts. Deumans, however, are able to use their infinity blasts in any stage where the player's character level is at least level 10.

Unlike the regular game, all items may be dropped on the ground through the inventory to pass to other players. Creature drops are still individual, so it is important for players to share items they receive with the party, as the starting equipment may not be sufficient to clear the stage.

Each challenge set (except the Little Wing Grand Prix) also feature their own clear rewards for clearing all stages within a target time. These rewards are awarded on a per character and a per Type basis, meaning that a character may earn the full clear reward up to 5 times, by clearing within the target time on every single Type.

When a challenge mission is cleared, all players will receive an amount of challenge points depending on the mission cleared.