Infinity Missions are particular missions with a lot of variety and unique drops that can come only by playing them. From enemies that can spawn, theyr level range, different bosses and peculiar bonuses that are applicable to Infinity Missions to increase your odd of obtaining those unique drops. It is to keep in mind they are thought to be an endgame activity to get very rare and powerful weapons, at times with really low drop rates. 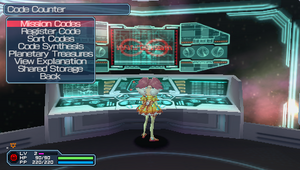 The Code Counter, present in MyShip 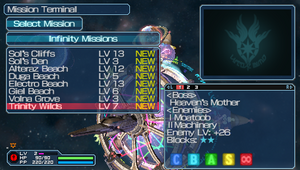 Infinity Missions are procedurally generated missions with player customizable Area, Blocks, Boss, Enemies and Enemies Levels. Players are also able to add a variety of Special Effects to the Infinity Mission, to further customize the mission for their own needs. A combination of all these allows the players to create a massive amount of unique missions (not an infinite amount of missions, but pretty close).

Each Infinity Mission has several attributes:

Infinity Missions are primarily used to spawn large groups of relatively uncommon enemies, such as Nanodragons, which allows the player to pick up their drops in a much easier fashion (compared to running Flaming Horns a dozen more times for the same number of spawns). It also allows the players to make incredibly difficult missions that spawns large groups of difficult enemies, such as Nanodragons, and attach ATK/TEC multipliers onto them for even more pain.

Note that there's an upper limit of 100 Infinity Missions. Once that limit is reached, the player cannot Synthesis Missions or add missions via Mission Discs unless they delete some missions to make space. Deleting missions can be performed from the Code Counter. Deleted missions and their associated sythesis points cannot be recovered, but it's possible to obtain more copies of missions, if they originated from Downloadable content or Planetary Treasury.

All Infinity Missions has an inherent drop rate bonus and a elemental bonus, which can be seen on the right side of the screen during the mission. 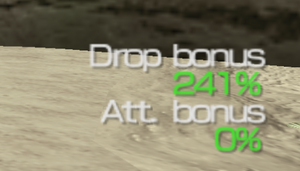 Drop Rate Counter, on the right side of the screen

The Drop Rate Bonus is determined in the following way:

An Infinity Mission with Bonus Enemy Level at +5, and no Drop Rate Special Effects:

An Infinity Mission with Bonus Enemy Level at +49, and Drop Rate + 30% Special Effect:

On top of the initial rate, the Drop Bonus also increases as the player defeats enemies during the mission. Therefore, the longer the Infinity Mission is, the higher Drop Rates it can achieve.

The Elemental Bonus increases the Elemental Percentage of dropped Weapons or Shield-weaves. The Bonus is directly added to the percentage.

The Elemental Bonus always starts at 0%, and increases as the player defeats enemies during the mission. Therefore, the longer the Infinity Mission is, the higher Elemental Bonus it can achieve.

How to obtain missions[edit | edit source]

Mission Discs containing these 3 missions can be obtained from the Planetary Treasury. 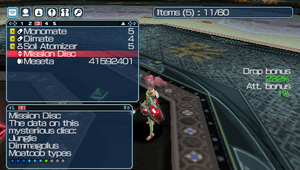 A Mission Disc in the inventory

Mission Discs are special items which drops from Infinity Mission Clear Boxes. These Discs can be spent to obtain new missions at the Code Counter.

The attributes are decided in the following ways:

Boss, Area, Enemy Table 1: Determined by the Area and Boss of the mission the disc dropped in.

Enemy Level: Randomly selected between +1 and +49.

Special: 20% chance of not having any. 80% chance of having any one special effect at Lv1, excluding Enemy HP x, Enemy ATK/TEC x, and Enemy ACC x. 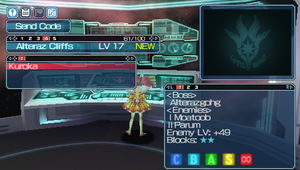 Infinity Missions can be shared between players during Multi-mode. Mission sharing can be done from the Missions Data tab in the menu, and using the Infinity Missions option. Players receive infinity missions from other player using the same menu. 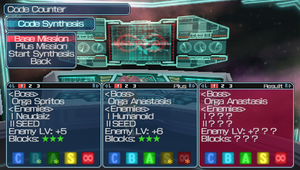 Mission Synthesis is the primary way of customizing and obtaining Infinity Missions.

The attributes of the new mission is determined as follows:

Boss: Same as the Plus Mission's Boss.

Enemy Level: The average enemy levels of both missions, and then either increased by a random number between -10 and +10. The final result has a minimum of +1, and a maximum of +49.

Blocks: Randomly selected from the Block count of either mission.

Area: Same as the Base Mission's Area.

The special effects on the new mission is determined via the following steps:

Unfortunately, if neither of the missions have any effects, no effects will be present on the result mission.

After a Synthesis, the new mission is added to the list of Infinity Missions. The two component missions are not consumed as the result of a Synthesis.

It's possible to Synthesis using the same two missions as many times as the player would like; however, the result mission will always be the same, including special effects, enemy tables, area counts, and etc.

The amount of Meseta and Type Points gained from an Infinity Mission is dependent on the Enemy Level, the difficulty of the mission, and the number of enemies defeated.

There are a total of 10 possible areas. The area of a mission is indicated by the mission's name.

Unlike Open Missions, the area of the mission has no relation with the type of enemies spawned, or the boss at the end of the mission.

The designs of each block in a mission is dependent on the area of the mission. However, all blocks will only have one path, with no deviations, regardless of design.

Note that Mission Contraptions will not appear in infinity missions, other than keys, locks, and teleporters. This includes contrapations otherwise very common to their areas, such as water switches in ohtori castle, and poison devices in crodog rainforest.

There are a total of 40 possible bosses for an infinity mission. The boss of a mission is indicated by the mission's name.

There are a total of 7 enemy tables, each with 5 categories of enemies. Some categories also include Rare Enemies.

* Despite using a Parum droptable, these enemies appear with group 1 Stateria

Each monster rank is associated with 4 patterns, which relates to the enemy tables and the category numbers of the tables:

At the start of each block, one of the 4 associated patterns is randomly chosen, which dedicates the categories which enemies can spawn from. Then, three types of enemies are randomly chosen from categories of the chosen number or below, and spawned into the block.

Each Infinity Mission has a set chance of spawning rare enemies (1% to 8%). This chance is checked at the start of a mission; If rare enemies will spawn, one rare enemy is chosen from all rare enemies in Table 1, and replaces one of the enemy types in the final block.

When two missions are synthesized, the new rare enemy spawn rate is averaged between the two material missions. The rate can gain a +1% or -1% during a synthesis. 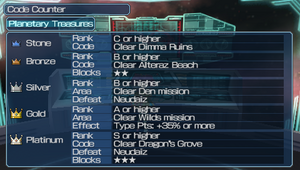 The Planetary Treasure screen at the Code Counter

Note that clearing the appropriate Infinity Mission only provides a chance of dropping the treasure, with no guarantees. Once any treasure is traded in at the Planetary Treasury, all requirements are replaced with new ones.