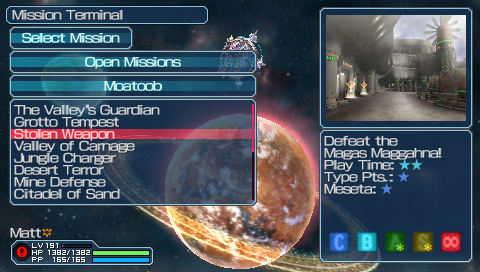 Open missions, as seen from the mission counter

Missions that can be undertaken multiple times and completed solo. They range in difficulty from C to ∞, with enemies of increasing difficulty.

Open missions, also known as free missions, are missions which feature no special objectives, and task the party with reaching the end and defeating the target creature. Open missions are available both in story mode and multi mode, with no differences between the missions available. All open missions can be played alone or with up to 4 players, with no inaccessible areas that require a certain amount of players in the party.

In story mode, if the player returns to Clad 6, either by returning through the mission entrance or becoming incapacitated without a Scape Doll, the mission will immediately end. In multi mode, players may return to Clad 6 freely and resume the mission, however returning to Clad 6 through an incapacitation will affect the mission's end rank. Teleport crystals are also located at the beginning of each sector in multi mode, allowing players to quickly warp between the beginning of sectors after the teleport crystals have been activated.

As open missions do not feature any special objectives, the party's clear rank is determined on the amount of creatures defeated in the mission, and in multi mode, if any players are incapacitated and have to return to Clad 6. All open missions require every creature defeated for

rank, and also reward the same items on achieving

After completing an open mission which does not feature a boss creature as the target, the route back to Clad 6 may be blocked with a rainbow teleporter. This rainbow teleporter will transport the party to an unknown sector, where they will fight Orga Dyran.

Orga Dyran will be the same level as the target creature of the mission, which is 4 levels above the mission's creature level.

The urgent missions that can be received depend on the planet of the open mission that the party was playing.

In missions which feature boss creatures as the target, there is a rare chance that a teleporter to a special shop will appear next to the boss teleporter. These special shops sell unique items which cannot be obtained anywhere else.

The shop which appears depends on the planet of the open mission that the party is playing.

Initially, only a very small amount of open missions are available to player, and more must be unlocked by fulfilling certain criteria depending on the mission.