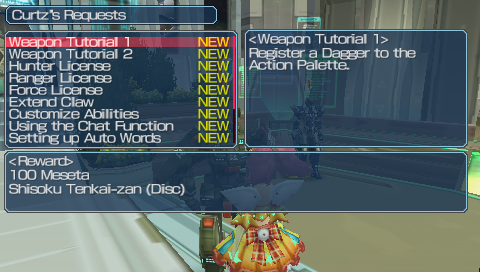 There are a total of 4 different NPCs that can handle out client requests, which each NPC specialising in different types of requests. A player may only accept one client request from each NPC at a time; however, they may cancel their current client request by talking to the appropriate NPC. There is no penalty for doing this, although any progress accumulated on the client requests will be lost if applicable.

Client requests can be repeated infinitely to the player's desire (not including Curtz' requests), allowing them to amass more meseta or items as they see fit.

Players can see their client request progress in the main menu, under the

mission data section, followed by the 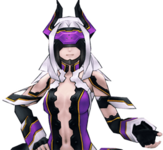 Ilias is a cast that can be found in the cafe. Her client requests involve clearing missions within a time limit, with many client requests also requiring the use of a specific weapon type, and also with minimum difficulty requirements.

For the weapon specific requests, the following rules are imposed on the player: 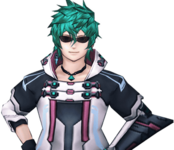 The client requests he offers to be done with certain partner characters will also feature extra cutscenes, which explore the backstories and feelings of the characters featured. 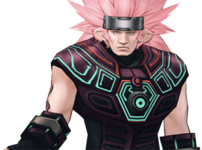 Pit is a beast that can be found in the cafe. His client requests involve defeating a specific number of creatures, many of them requiring to be defeated on higher ranks.

For his client requests, it is mandatory that the player with the request lands the final blow for it to count towards the client request's progress. The kill may be dealt in whatever manner the player chooses, whether it's with a weapon, trap, or blast, as long as they are the one to land the killing blow. 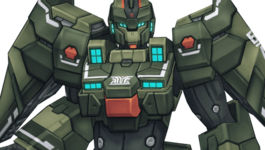 Curtz is a cast who can be found in Clad 6's central lobby, near the Little Wing offices. His client requests are aimed at beginners, and request the player to do various simple actions such as Extend Type and collect Titles.

Unlike the other characters, his requests can only be done once. Once all of his requests have been completed, he will give the player his partner card, and disappear from the Clad 6 lobby.