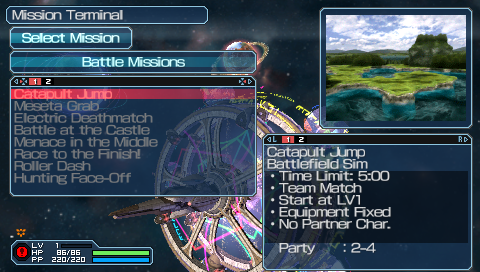 Battle missions, as seen from the mission counter

Player-versus-player missions. Victory conditions depend on the type of battle chosen. You cannot keep items found on these missions.

Clearing battle missions will provide the players with battle points, which ranks up their battle class displayed on their partner card.

Type abilities and blast modules are not provided under any cirumstance. Deumans have access to their infinity blasts, however as incapacitation results in a loss of the blast gauge, it is very unlikely for a player to be able to use their infinity blast.

Upon becoming incapacitated, a player will respawn at one of the mission's spawn points, and gain 5 character levels to help them gain an edge against their opponents. They will also lose a portion of their points, or drop a portion of their meseta.

There are multiple ways of earning points, which will depend on the mission. Those methods are:

At the end of a battle mission, all players will gain battle points, dependent on if they won or lost, and a few other factors.

If the match ends in a draw, all players will receive points as if they ended up in last place.

Depending on the battle class of the winners and losers, points may also be modified further.

If all players gained a total of 0 points during the mission, they will not receive any battle points, whether they won or lost.

After a player accumlates a certain amount of battle points, they will rank up their battle class, which will be displayed on their partner card. Battle class and battle points are carried across all characters and all types.