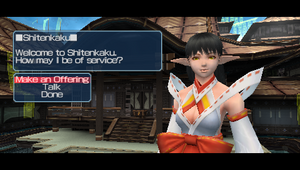 The Offertory Box is a Trade Mission in Neudaiz that is accessible after clearing Ep1 Chapter 4. The Offertory Box trades Photon Drops, Photon Crystals, and Photon Spheres. Unlike other Trade Missions, however, the offertory box does not simply trade items for items; instead, the player makes an offering using a specific amount of items, and then have a chance of receiving items.

Weapons and Shield-Weaves obtained have random attributes (with the exception of Altera-senba, which is

After offering items, the shrine maiden has a set pattern of speech, which indicates if the player will reach the treasure vault or not.