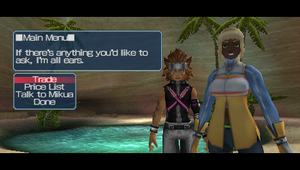 I've set up an orphanage for children who've lost their parents to war. But there's a problem I need help with.

There were so many children orphaned when the SEED attacked three years ago, I decided to start an orphanage.

That was a year ago now. Before then, I was just another girl working in a shop on some colony.

I met Dias sitting outside the shop I used to work at. He had just lost his parents—he didn't know what to do.

I let him stay with me for a while, but that was no replacement for having a family.

Then it hit me. If I could make a place where children who had lost their parents could live together, maybe they could become a new family.

It took two years to save up enough money to open the orphanage.

It's not an extravagant life, but the children seem happy again. I'm busier than I've ever been, but it's worth it.

The children are happy, but they can be a little too... enthusiastic. They keep breaking all their toys! It takes all my money just to cover their living expenses. There's nothing left over for new toys.

Do you think you can help? If you can find decorations that would make good toys, it would really help me out.

The desert's filled with things lost by adventurers over the years.

Sometimes Dias and I come out here to scavenge for anything that might be useful. If you have any decorations that would make good toys, we'd be happy to trade what we've found with you.

Some of the things we come across are pretty rare.

What do you say?