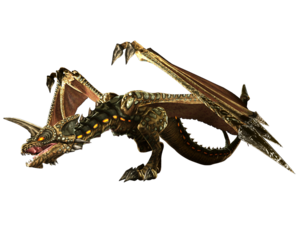 Boss creatures are powerful, unique creatures that are usually fought at the end of a mission as the target of the mission. A cutscene always precedes fighting them, and they exist in unique arenas. Defeating them usually ends the mission, rewarding the party with any mission clear rewards, and up to 8 different drops from the boss.

Boss creatures tend to be the most powerful creatures in the game, and can be very tough to defeat if the party is not prepared. Unlike most regular creatures, bosses also tend to have many different locations to be hit, making area-of-effect attacks particularly effect against many bosses.